Songs to learn Italian language: how to have fun while studying

Italian songs are a great way to learn grammar and new words. You can easily improve your language skills and, at the same time, get in touch with some elements of Italian culture. Listening to songs highlights all sorts of grammatical structures such as verbs and conjugations, and these are much easier to memorize with a melody attached. So, singing and studying Italian music will help you to simplify your Italian grammar book!

What’s in an Italian song? There are melody, lyrics, and lots of secrets to learn the Italian language. So if you want to really study Italian and learn it fast, consider that good songs will be one of the most efficient and effective tools.

Listening to Italian songs: a good way to improve your Italian

Italian music is ideal for language learning mainly because it’s catchy. When you learn Italian by listening to Italian songs, you don’t feel like you’re studying at all. Learning from textbooks can sometimes make you feel like you’re working just trying to handle Italian. With Italian music, though, you just feel like you’re listening to the radio, which is almost guaranteed to put you in a good mood. So, listed below, you can find the most important benefits derived from learning the Italian language through songs.

Learn Italian from your home Here below, we listed some of the best Italian songs to learn Italian (with lyrics) that will help you to master your Italian language grammar, pronunciation, and vocabulary in context.

“And I think of you” is a song in which a man lives an impossible love for a woman who is not his official fiancée; he is, therefore, the victim of a feeling as impossible as obsessive. The melody without words in the second half of the song is then the apotheosis of this impossible love: it is the real voice of his heart, which sings its torment and its ecstasy without words. This song can be useful for beginners for the continuous repetition of some words that can help them to understand in an easier and more direct way.

“Sky Blue” is a memorable Italian song with music by Paolo Conte. This song immediately entered the collective imagination of Italians, despite not belonging to the traditional and melodic genre, and has become one of the most popular songs, played abroad. It is not necessary to philosophize too much about the meaning of “Azzurro”. It is a beautiful song of atmosphere, a flight of fantasy and feeling. He is still being held in the city from work, and he is probably “dreaming” on a hot Sunday afternoon. “I’m looking for summer all year round…” who doesn’t look for it?

“A life on vacation” is a pretty new song in which the concept the band tries to express is quite simple and clear: try to free ourselves from the logic of an increasingly productive world and start trying to go back to asking ourselves those questions that are the basis of our actions: why do you do it? why don’t you go? Certainly a not so new thought, but reaffirmed here in a very light-hearted way.  Nice is the reference to the professions, which have evidently changed in recent years so that the list of new professions appears as a real mirror of how the world of work turned into our contemporary world. This song is a real picture of Italian reality. (*in this video a word is written in a wrong way: It’s “analista” and not “annalista” – this  word means “analyst”).

“Screaming against the sky” is about a fact really happened in the author’s life. In a moment of emotional pressure that he felt inside, the singer declared that one day, while he was wandering, he stopped in a field and suddenly let out a scream, releasing all the rage he had inside. In short, “Screaming against the sky” is the desire to make it clear that we exist in this world and that we are worthy. After all, who has never felt the desire to scream out loud, as a liberating gesture? This song was a hymn for an entire generation; it’s the manifesto of the Italian Generation X.

“All my mistakes” is a song written by a band considered the pioneers of Italian electronic rock. Released just four months before the year 2000, the song symbolizes the leap into the dark of the new millennium: fear, inebriation, and dizziness. The peculiarity of this song is that it’s enough to understand the meaning of a word to be able to deduce all the meanings of the text. The word that occurs in almost all the sentences is “mistakes”. (* error-  min 0.40 : the right sentence is “ma fintanto che sei qui posso dirmi vivo”).

“Gloria (name) but also Glory (feminine noun)”. The Italian song is articulated on the double semantic value of the title, intended both as a noun and as a woman’s name so with this you can learn how a word can be used with different meanings. Gloria is one of the most famous Italian songs in the music history and many covers and reinterpretations have been made. The first translation from Italian to English was by Jonathan King and a 1982 cover by American singer Laura Branigan sold over one million singles just in the United States . So, trying to understand the real meaning of this song is a great training. May be there’s something else to unveil.

“Giant” is a track by the most important Italian rocker and, according to Italian tradition, it speaks about love, family, and devotion. The song is dedicated to his nephew. It tells about the emotions of becoming a grandfather, with lots of wishes and dreams for the child, just born but already “my Jesus, the light on nothing, a little Buddha”. Giant is the child in the title. A song that does not cheat its rock soul but that has an inner prayer in the eyes of a grandfather who greets the baby. Catchy, rock, full of love and feeling: the perfect song to learn Italian.

Venice Silent Tour
Learn Italian in the silence of the evening

Learn Italian by visiting Venice outdoors in the evening 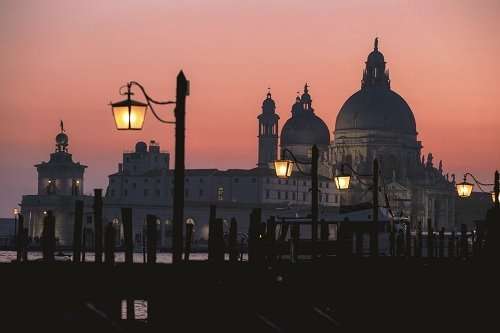 The role of music in language learning: what Science says

Learning is a long process that depends not only on the unique skills of the student but also on the strategy chosen for teaching any subject, and learning an alternative language is different from learning any other kind of subject. Teaching a foreign language is not just about teaching grammar and vocabulary; this is only one step of a big process. You have to create real language use for the students by taking into account the context in which you are involved.

Music has been used as an alternative teaching method in foreign language acquisition for many years, and it has been demonstrated that it helps with vocabulary, grammar and improves linguistic skills. Michele Lenzerini, Italian language teacher and headmaster of the school Easy Italian Language & Art, is one of the supporters of the importance of songs for learning Italian. He created the T.P.S.R. (Total Physical Singing Response), an alternative teaching system that has the main purpose of accelerating learning abilities in the study of Italian language using songs and movements. This method is inspired by the well-known T.P.R (Total Physical Response) by James Asher.