Learn Italian in Venice, Italy: the best place to succeed

Venice is the result of a history dotted with unreachable artistic, cultural, and economic peaks and its territory is the ideal place to enhance the spiritual and material elevation of any person. With this we do not want to speak only of the famous places of interest that have been able to give, for centuries, a perfect identity of the lagoon, but also of the academic and educational sphere, an authentic generator of talent envied around the world. Learn Italian in Venice will be THE experience. This small city is a place of moving beauty, a landscape that strikes you in the heart. Everything is slower as if the whole city were following the springy movement of the waves below. It is no coincidence that reggae is one of the music that Venetians love most.

Your feet will be your best friends, in Venice. Moving your legs also moves your thoughts. As you walk, your brain empties and your head, surprisingly, becomes creative.

Getting lost is beautiful: in Venice, you never walk the same street twice and suddenly you find yourself alone, where no tourist passes and it’s you and ancient beauty.

It’s charming to ramble through the streets, sitting in a vaporetto, and hearing the language mix.

Do you need a place with beauty at your fingertips? Do you want new habits? Are you looking for the best place to learn or improve your Italian? Venice is the answer.

Learn more about our Italian School 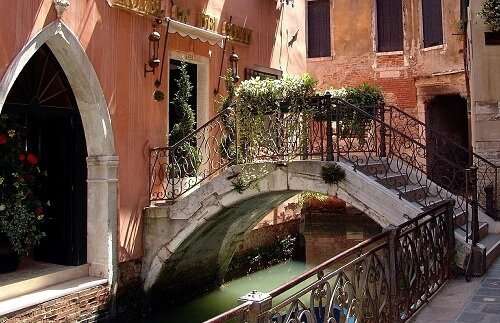 History and Culture of the floating city

The city has a long history, which seems to have come out of a novel. The Roman Empire was in decline and its western part had by now fallen in 476. The Italian peninsula was invaded by the Germanic peoples and some fugitives decided to take refuge in the islands of the current lagoon, quite difficult to reach and easy to defend. Here, according to tradition, the Republic of Venice was founded in 697.

What was a group of fugitives, over time became a European-level economic and military power with a large influence in the Mediterranean Sea. Venice was the European “terminus” of the Silk Road, the great trade route that connected China to Europe, passing through mythical cities such as Samarkand and skirting dry and dangerous deserts.

Venice became rich and powerful, built its famous arsenal, and thanks to its fleet it had control over the passage of goods in the eastern Mediterranean. At the time of its maximum expansion, Venice governed numerous islands and territories along the Adriatic Sea, the Peloponnese, Crete, and Cyprus. This powerful republic was ruled by a class of merchants and aristocrats and the Doge was the equivalent of the prime minister. The Republic of Venice fell in 1797, after a millennium of glorious history, still recognizable today in the splendor of its historic center.

Lots of water passed under the bridges (in the true sense of the word) but Venetians are very proud of their history and particularly fond of their traditions. All of them can help you to learn Italian while you’re visiting Venice and its beauty.

Italian course in Venice at the museum

The Mostra internazionale d’arte cinematografica di Venezia takes place every year, usually between the end of August and the beginning of September, in the historic Palazzo del Cinema on the Lungomare Marconi (and in other buildings nearby or not far away), on the island of the Lido di Venezia. After the Academy Awards (Oscar), it is the oldest cinema event in the world. The main award that is awarded is the Leone d’oro (Golden Lion), which owes its name to the symbol of the city, the Lion of San Marco.

With the Film Festival, exclusive parties are always organized, where you may also have the opportunity to meet one of your favorite actors. Unfortunately,  many of these are accessible only by invitation, but as soon as the locations that host them will be made public, you can find ways to participate in at least one of these, by looking through the different websites that talk about them. Learn Italian in Venice is now becoming more attractive, don’t you think?

Every odd-numbered year, more than half a million people land in Venice to visit the Art Biennale. But to really understand what the Biennale is, we must take a step back in time until 1895. This is the official year of birth of the Venice Biennale, called at the time as the first International Art Exhibition in the city of Venice. Over the decades, biennial events linked to other sectors of artistic activities have been added to that first fundamental event:

Italian language with an art course 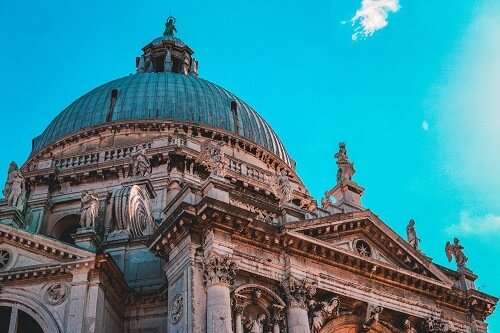 The Carnival of Venice

The Carnevale di Venezia is one of the most famous festivals in the world and presents all kinds of events: jugglers, musicians, and dancers perform in public spaces, making everyone forget about their work and duties. In the past, the Carnevale even reached the length of 6 weeks, from December 26th to Ash Wednesday, involving public areas, buildings, theaters, and bars where a total transgression was the only command to be followed.

The tradition of Carnival originates from the religious festivals of ancient Rome, when people could join wild parties with music and dance along the streets. Those festivals were moments of light-heartedness, with the opportunity, during the parties, to subvert the social order.

Currently, it takes place from 30 January to 16 February, but remember that during this event you can be whoever you want! You can’t miss this opportunity!

The Bàcari of Venice

Some say that the name bàcaro comes from the Greek god of wine, Bacchus, but it could also come from the Venetian expression “far bàcara“, which literally means “go to party”. A famous Venetian proverb says “drink wine and leave the water for the mill”. So you can decide to follow this suggestion by adopting the same perspective as a Venetian: going from bàcaro to bàcaro. The Bàcaro is the typical Venetian pub where it’s possible to spend time eating small portions of food and drinking good wine. Walking in Venice is very fascinating, and if you also add good food, wine, shots and some laugh, what more could you want? If you love learning the Italian vocabulary and grammar related to food and taste, our tour of the bacari is the experience for you.

Changes in lifestyle. The spell of Venice

Most Venetians are convinced that they have always lived with ghosts and argue the canals of Venice are crossed by intangible presences, good or bad, like the seven witches who move in the lagoon on a large mortuary gondola. The lagoon with its deep silences, the thick fog that suddenly falls and its millenary mysteries have inspired many black legends, often originating from news events. One of the most famous legends of Venice is that of the ghost of Giuseppe Zolli, a Garibaldian who had sworn to Garibaldi to be ready to look over his shoulder even after his death, appeared in 1921 in the gardens of the Venice Biennale. Some witnesses said they were mysteriously struck by walking near the statue dedicated to Garibaldi which is located in the gardens. The people’s anxiety forced the authorities to set up a patrol in front of which the legendary ghost materialized with a red shirt. The Venetians then made him erect a statue behind Garibaldi so that he could always watch over him. Since then, there were no more attacks and apparitions.

As soon as you arrive in Venice you will realize how much this city is wrapped in an aura of mystery. You will have the feeling of going back in time and becoming part of a reality full of things to discover. It is clear that learning Italian in such a particular location will push you, even more, to commit yourself because behind every corner there is a mystery waiting to be unmasked.

How to choose? Italian classes and outdoor courses in Venice

Students who are regularly involved in outdoor language education have marked improvements in basic skills and reading. The outdoor courses, in addition to various educational advantages such as having fun, much more stimulation, not boring, more relaxed and informal atmosphere, give you the opportunity to interact with your classmates and the teacher in a much more direct way. For example, when a teacher explains the architecture of Venice and you are exactly and physically in front of the work he/she is explaining, everything becomes simpler and easier to remember. Watching a picture of a book is completely different from being in the same physical space where it really is. Venice is one of the cities with a very high cultural heritage where what you study can be beside, above or below you.

A language course to learn Italian in Venice

There is a good reason to visit Venice: studying Italian here is a dream for many people. Our intensive study courses, group, or individual courses for each level meet all the needs of the students. Learning the Italian language together with the history of art and, in general, with Italian culture is a complete course of study, at 360 degrees.

Taking part in an Italian course in Venice is first of all the right opportunity to visit the city, discover its most hidden corners, begin to understand its dynamics, begin to “live” the city.

Cultural activities complementary to learning Italian, such as educational walks through the city, have the dual function of consolidating and improving the level of knowledge of Italian and discovering what Venice is.

The city itself is unique for these kinds of activities, it seems an ideal stage for experimenting with any form of teaching and learning. Studying Italian dynamically does not require an incredible effort, but rather a great passion for the language and the environment that surrounds us.