Italy is famous and unique for its huge contributions to the worlds of art, fashion, opera, literature, and design; its rich history, beautiful architecture, and delicious food make it one of the world’s most sought-after tourist destinations. But perhaps even more intriguing is the Italian language itself.

The Italian language has a long history; passed down over many generations, Italian has been uniquely preserved throughout the country of Italy, and it raises interest among learners due to its natural musicality, romance as well as beauty. Over 85 million people speak Italian, and it is one of the most studied languages all over the world. But there are numerous other interesting Italian language facts that we bet you didn’t know.

History of Italian language: an interesting fact itself

The Italian language has developed through a gradual process, which began after the Fall of the Roman Empire; Latin evolved into a variety of regional dialects – more than 1,000 – now known as Romance vernaculars.

For centuries, the country was divided into a number of different states, up to 1861 when Italy became one unified nation, and the government decided to choose one dialect as the official national language. Due to its cultural and economic hub, the Tuscany dialect triumphed in the decision for an official language; however, at that time, less than 2.5% of Italians could speak their National language!

Indeed, modern Italian was formed by Dante Alighieri, not only a writer but also a political thinker.  He became the country’s leading cultural hero for his role in establishing the language, as, during the late Middle Ages, most poetry and literature was written in Latin. Dante wrote the epic poem The Divine Comedy in the Tuscan dialect. He left an indelible mark on the language and helped position Tuscan Italian as the basis for the Italian spoken today.

Nowadays, the purity of the Italian language is fiercely protected by the Accademia Della Crusca, a society of linguists based in Florence. Italian language statistics are intricate too

Italian is the official national language in Italy, and also the co-official language of Switzerland, Vatican City, San Marino, Slovenia, Croatia, and Brazil. It is also amongst the quite frequently spoken languages in Argentina and the United States.

Even though Italian is ranked 19th on the “List of Languages by the number of native speakers” − in a near tie with Turkish and Urdu − it is the 4th most studied language in the world, after English, Spanish and Chinese, and ahead of French.

For what concern the US, there are large communities of Italians, with the majority residing in New York City, Los Angeles, Chicago, and San Francisco, and Italian culture is integrated into the social fabric of daily American life, due to the fact that many Americans are descendants from Italian immigrants.

In Higher Education, Spanish is the most studied language in the US, with 50% of college students choosing to learn Spanish. Italian is the 5th most studied, with a percentage of over 4%. Although students in the United States are not compelled to learn a language they feel will not help them directly in their career, Italy is the most popular non-English speaking destination abroad for American university students, as the bel paese has always played an alluring role in the foreign imagination.

There is also an increasing number of learners via online lessons: the use of new technologies has made the whole process much easier. You can study Italian via Skype at any age, without depending on a particular location. All you need for a lesson is a good internet connection, a headset, and a computer. You can also choose the intensity of your lessons, and classes tailored for your needs,  considering your goals and objectives.

Italian is also called the language of love. In fact, some Italian words such as amore, tesoro, bellissima, and innamorato, are considered to be some of the most romantic words in any language. And also the rhythmic distribution of consonants and vowels in the Italian language contributes to its marked lilting sound. This is why speakers of other languages often say that Italian naturally sounds like singing.

It’s no secret that the Italian language has enriched English: have you ever said ciao, or eaten al fresco, ordered a pizza, spaghetti, or a cappuccino? All these words are clearly derived from Italian.  The greatest influence of the Italian language, however, is in the vocabulary of music.

If you play an instrument, you are probably familiar with terms like crescendo, adagio, forte, and tempo. All of these words have Italian origins; when the rules for music notation were worked out and written down, it was all done in Italian, during the Renaissance and Baroque periods.

But other words, like concerto, piano, soprano, and opera have made their way from the original Italian into our everyday musical vocabulary.

It is a fascinating fact to know that the Italian language is also strictly connected to art and architecture: many English words come directly from Italian terms, such as madonna, putto, cameo, and chiaroscuro. For art lovers, there are great opportunities to study Italian in Italy and to take art and architecture lessons as well. In the majestic city of Venice, for example, you can discover the masterpieces of famous Venetian artists from the Middle Ages to the contemporary age, as well as the secrets of the city built on water.

Learn Italian in a relaxed
and informal environment

There are only 21 letters in the Italian Alphabet. The letters j, k, w, x, and y are missing from it; however, if you see these letters in an Italian text, the word must be borrowed from another language.

The most widely spoken regional dialects is Neapolitan, with over five million speakers, with strict grammatical rules and even strong similarities to Spanish and Catalan. It is an all but impossible language to learn: most Italians find Neapolitan incomprehensible, and yet many are fascinated by the strange undulations of this impenetrable dialect. However, there are many other regional dialects in Italian; some of them are so different from each other that they’re not mutually intelligible. In fact, some linguists have proposed that the Sicilian dialect should be classified as its own language. And that’s why Italians use so many gestures. It is a quick way to understand each other.

If you take Tuscany, there aren’t real and proper dialects, even if the accents differ from one city to another, while in other regions it is easy to spot dialectal differences between places in the same Province. This is one of the reasons why people are choosing Tuscany for their Italian studies, especially Florence, but also Follonica, on the seaside facing the astonishing Tyrrhenian sea. 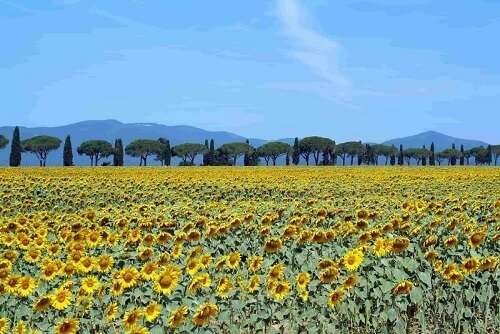 The longest word in the Italian language is generally said to be the 26 letters long ‘precipitevolissimevolmente’ that means ‘very quickly’, even if  in modern times it is surpassed by a medical term, the 29 letters ‘esofagodermatodigiunoplastica‘ which means surgery after the removal of stomach and esophagus. But difficulty increases with the composed forms of some numbers; if you try to spell 235,542, the result will be the 52 letter word ‘duecentrotrentacinquemilacinquecentoquarantatreesimo‘!

Finally, some words you may believe to be English, but…

Many words in the English dictionary come evidently from Italian, but there are hundreds of other less obvious ones. If you want to learn some more Italian language interesting facts, you might be surprised to learn the following:

The word America? It comes from an Italian, Amerigo Vespucci, a 15th-century explorer. After the discovery of Colombus, it was Vespucci who first claimed that Brazil and the West Indies were actually part of a completely separate continent. The name America comes from the Latin form of Vespucci’s name, Americus, and its first known use is in a 1507 map.

Also the word “volt” comes from an Italian inventor: everyone knows that Thomas Edison invented the lightbulb, but it was the Italian Alessandro Volta,who discovered electricity. Nowadays, ‘Volt’ is the standard measuring unit of electricity (in both English and Italian).

And even the jeans you are wearing were born in Italy! The word comes from the French word for an Italian city: Genoa – Genova in Italian – and Gênes in French, which is what the French called the port city where sailors used denim fabric to protect their goods from the elements.

The word graffiti, describing the urban art comes from the Italian word ‘graffiato’, meaning ‘scratched’. The word graffiti itself describes also ancient inscriptions and drawings on sculptures and walls.

Also, the medical term quarantine comes from the Venetian word ‘quaranténa’. It comes from the phrase ‘quaranta giorni’ (forty days) referred to the period Venice would keep a ship suspected of carrying disease in isolation off-port before arriving in the city. Thanks to those huge efforts to keep out and cure the plague, Venice was fairly successful in managing the disease.